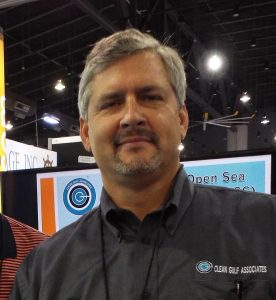 With more than twenty five years of experience in incident and event management, James has extensive response experience at the local, regional, and national levels and vast experience teaching and using the Incident Command System (ICS). Prior to joining EMSI’s cadre, he served over 24 years in the U.S. Coast Guard, with two tours as a member of the Coast Guard’s prestigious National Strike Force and one with the USCG Gulf Strike Team as its Operations Officer. In his current job, James currently serves as the Vice President of Clean Gulf Associates, one of the largest oil spill cooperatives in the Nation.

Leading and serving in key positions for several national-level incidents, James was critical to the success of numerous response efforts, including Hurricanes IKE and GUSTAV, DM 932 oil spill in New Orleans, flooding of the Red River in North Dakota, and the Deepwater Horizon Oil Spill, as well as dozens of other natural disasters, hazardous substance, and oil spill incidents. During the Deepwater Horizon response, James was tasked as the Federal On-Scene Coordinator, Deputy Area Commander for pollution response, and Incident Commander for Houma, LA. He has also served on the Coast Guard’s Incident Management Team, as the USCG’s representative to the Interagency Board (IAB), and was the Co-Chair for the Regional Response Teams for Federal Regions VI, VII and VIII. This expertise was noted as he was selected as the Chief of Response for the Coast Guard’s Ninth District, responsible for all search and rescue, marine environmental response, law enforcement, and port and waterways coastal security from the Appalachian Mountains and Chattahoochee River in the east, to the Rocky Mountains in the west, and from the border between the U.S. and Mexico and the Gulf of Mexico to the Canadian border in North Dakota and covering 26 states in total.

Since joining the Coast Guard, James has been a strong advocate for incident management, teaching and serving as a coach for countless ICS-300 and 400-level team and position-specific courses. In addition to teaching ICS, he was key to the development of the Coast Guard’s Operations Section Chief job aid, used by countless members of the service and industry during incidents. Complementing his response experience, James also has extensive experience designing, controlling, evaluating, and participating in regional and national-level preparedness exercises (PREP) for “all hazards” response under the National Response Framework. He has worked extensively with the private sector, the interagency community, and Department of Defense agencies for the past twenty years.

James holds a Bachelor of Science in Geology from the University of Southern Mississippi, as well as a myriad of Incident Command System and emergency response courses from the US Coast Guard, EPA, FEMA, and the state of California.