On October 17, 2017, FEMA released a long awaited “refresh” of the National Incident Management System (NIMS). This update to NIMS attempts to incorporate lessons learned and best practices from a wide variety of disciplines, at all levels of government, from the private sector, tribes, and non-governmental organizations. It also recognizes the evolution of our nation’s risk environment since 2008 as well as the maturation of our national incident management capabilities over that time.

The goal of this analysis is to identify notable changes in the new NIMS document compared to past iterations, suggest how specific changes might impact stakeholders, including EMSI clients, and provide general description and explanation on both large and small items of interest in this document.

The changes to NIMS, including the Incident Command System (ICS), are generally minor and should not require significant change to existing NIMS implementation, training, and application programs. That said, there are a number of updates in the new NIMS that are worth noting. 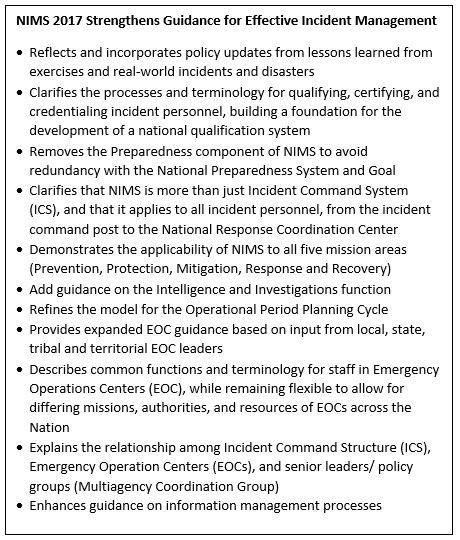 The previous NIMS document was written with many other supporting documents in draft form or set aside for future development. As these documents have been developed and evolved, it has changed the purposes of this document. As a comparison, NIMS 2008 consisted of five components:

In the updated NIMS 2017, a brief, introductory Fundamentals and Concepts of NIMS section and a Conclusion have been added and it now consists of only three primary components:

The Fundamentals and Concepts of NIMS section simply introduces the NIMS document and highlights the three NIMS guiding principles. These fundamentals still include Flexibility and Standardization, but now includes Unity of Effort, explained as a means of:

“…coordinating activities among various organizations to achieve common objectives. Unity of effort enables organizations with specific jurisdictional responsibilities to support each other while maintaining their own authorities.”

The Preparedness component from the 2008 version was removed from NIMS 2017 to avoid redundancy and conflict with the National Preparedness Goal. The Mutual Aid and Personnel Qualification and Certification elements of Preparedness are now included in the Resource Management component. While there is no explanation of why the On-Going Management and Maintenance component was removed, there is acknowledgement in the NIMS 2017 Conclusion section that:

• NIMS is a living document
• Stakeholders continue to build on the NIMS foundation by developing supporting tools, guidance, education training, and other resources
• FEMA will continue to collect stakeholder feedback, best practices, and lessons learned to drive revisions to NIMS
• FEMA will conduct quadrennial reviews to evaluate NIMS’s consistency with existing and new policies, evolving conditions, and experience gained from its use

In the cover letter from Acting Department of Homeland Security Secretary, it states that the FEMA Administrator, in his role as the head of the National Integration Center, is charged with managing and maintaining NIMS and will issue revised NIMS guidance and support its implementation.

Aside from these changes, the structure of the document remains unchanged.

Resource Management describes standard mechanisms to systematically manage resources, including personnel, equipment, supplies, teams, and facilities, both before and during incidents in order to allow organizations to more effectively share resources when needed.

At a high level, the new Resource Management component:

Pre-incident resource management is addressed in Resource Management Preparedness, explicitly explaining qualifying, certifying, and credentialing as a decentralized process that relies on this to the AHJ. It further explains that an AHJ may be a public or private sector entity, including a private sector company or NGO, that has legal authority to establish and administer a process qualify, certify, and credential person. This authority may be derived from the elected official, or in the private sector, from the senior executive.

This is a development that formally recognizes the qualifying, certifying, and credentialing processes of a private sector entity, as long as they follow the nationally standardized criteria and minimum qualifications, opening the door for private companies to establish formal and recognized ICS qualification programs.

Resource Management During an Incident 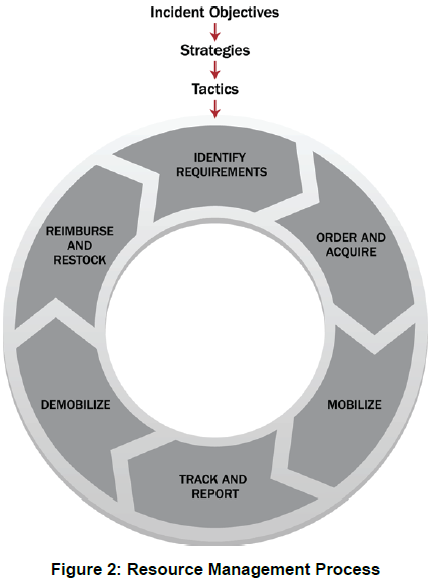 Previously referred to Command and Management in NIMS 2008, Command and Coordination underwent some terminology and organizational changes, but this will largely be transparent to practitioners. NIMS 2008 consisted of three primary systems to provide the elements of incident management, including the:

In NIMS 2008, MACS was described as “a system, not simply a facility” and included “a combination of facilities, equipment, personnel, and procedures integrated into a common system with responsibility for coordination of resources and support to emergency operations”. A diagram in NIMS 2008 depicted the Incident Command Post as an element of MACs, described as “On-Scene Multiagency Coordination” compared with “Off-Scene EOCs and/or MAC Groups”.

EOCs and MAC Groups were previously a part of MACS. The new use of MACS broadens the definition of MACS to include the Command and Coordination architecture for tactical coordination (ICS), operations support coordination (EOCs), policy level coordination (MAC Group), and their support through coordinated information (JIS).

The ICS section of NIMS 2008 described fourteen ICS Management Characteristics. These characteristics remain unchanged, but now apply more broadly, not simply to ICS, but to all NIMS Command and Coordination elements.

This is the element of NIMS that people are most familiar with and more apprehensive about changes. Fortunately, ICS remains largely unchanged and will continue to function as the same incident management system responders have used for four decades. But it does include a few minor changes of which practitioners should be aware.

Intelligence/Investigations Function: Typically, staff in the Planning Section are responsible for gathering and analyzing operational information and sharing situational awareness, while staff in the Operations Section are responsible for executing tactical activities. This common and familiar construct may still be used for intelligence and investigation activities. In addition to being organizationally located in the Operations Section and/or Planning Section, the Intelligence/Investigation (I/I) function may also be established as a Command Staff position or a stand-alone General Staff function (Intelligence/Investigation Section), or some combination thereof. This essentially codifies in NIMS doctrine what skilled and experienced incident management practitioners have known for a long time: ICS is flexible and I/I can be incorporated however necessary. 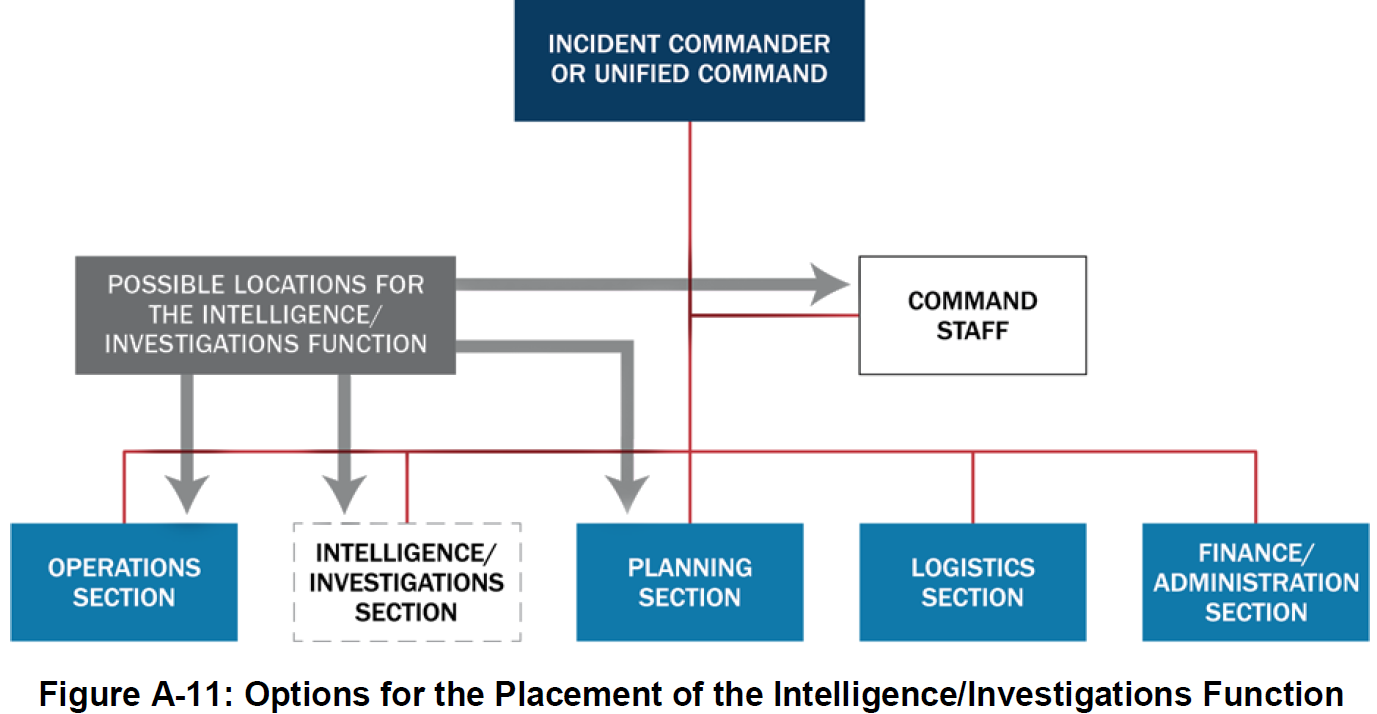 Revised “Manageable Span of Control” Guidance: The Span-of-Control guidance is loosened to provide more flexibility. “The optimal span of control for incident management is one supervisor to five subordinates; however, effective incident management frequently necessitates ratios significantly different from this. The 1:5 ratio is a guideline, and incident personnel use their best judgment to determine the actual distribution of subordinates to supervisors for a given incident”. This leave Span-of-Control flexible and up to common sense.

Additional Command Staff Positions and Command Advisors: Additional Command Staff positions may be necessary and NIMS 2017 allows for this flexibility. In conjunction with establishing Command Staff Officers beyond Public Information, Liaison, and Safety, Incident Commanders or a Unified Command may establish supplementary Command Staff Officers, in addition to Command Advisors and Technical Specialists. Again, this is a concept that skilled and experienced incident management practitioners have implemented for a long time, but now it is included in the NIMS doctrine. As a reminder, “Officer” is a specific term for those who are directly delegated areas of responsibility that specifically reside with the Command function; Command delegates the accomplishment of these tasks, once clear direction is provided, to the Officer level. If the function does not represent an inherent function of Command, “Advisor” or “Technical Specialist” may be a more appropriate organizational position title. 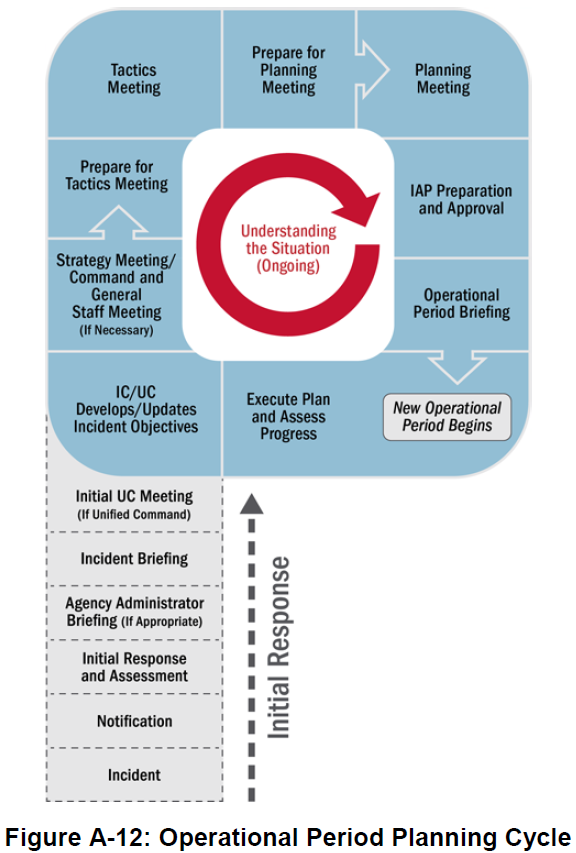 Resource Team vs. Strike Team: Strike Teams may now be referred to as “Resource Teams” when referencing to law enforcement resources. This is simply a terminology change with no impact to the functioning of the system.

Otherwise, there are no major changes to ICS and the system continues to function as it has for four decades, requiring no change to existing NIMS 2008 compliant ICS training and application programs.

Technically, Emergency Operations Centers (EOCs) are still a part of MACS since MACS encompasses all elements of NIMS Command and Coordination. NIMS 2017 reiterates that while ICS is used to manage on-scene, tactical-level responses, EOCs are used to manage off-scene support to ICS. It further acknowledges that EOC organization varies widely and that EOCs can be established:

• As multi-agency entities;
• As Department Operations Centers (DOCs); or
• For a nongovernmental entity, like a private company or NGO.

Multiagency Coordination Groups were a part of NIMS 2008 but were a sub-component of MACS. It is a more prominent element of NIMS 2017, where it is clearly described as a policy entity that does not perform incident command functions. Instead, as part of the off-site incident management structure of NIMS, MAC Groups act as policy-level bodies during incidents, supporting resource prioritization and allocation and enabling decision making among key personnel.

Communications and Information Management is the third component of NIMS 2017. Changes to this component from NIMS 2008 are minimal. NIMS 2017 enhances guidance on information management processes. Specifically, it:

NIMS 2008 included three key Communications and Information Management principles, including Interoperability; Reliability, Scalability, and Portability; and Resilience and Redundancy. It now includes a fourth principle of Security, acknowledging the potential need for confidentiality in communications and information management.

The Communications and Information Management component now also promotes the U.S. National Grid as an alternative to latitude/longitude map references.

Finally, the 2017 NIMS provides a Resources section that includes NIMS supporting documents, relevant law references, and additional supporting materials. This section is full of hyperlinks to take you to specific details

For EMSI clients and NIMS stakeholders, these changes do not amount to a significant shift in NIMS and ICS training, implementation, and application. These minor changes will be incorporated into EMSI NIMS and ICS programs, including training courses.