What Does this Mean?
For our clients in the oil and chemical sectors, not much…The Oil/Chemical Incident Annex makes little mention of private sector involvement and primarily focuses on federal roles and responsibilities. Owners and operators still bear the primary responsibility for the security and safe operations of their oil and chemical facilities, vessels, and conveyances, including for cleaning up their oil spills and chemical releases. The Oil/Chemical Incident Annex provides great detail on the:

Background: PPD-8
In March 2011, President Obama signed Presidential Policy Direction (PPD)-8: National Preparedness, aimed at strengthening the security and resilience of the United States through systematic preparation for the threats that pose the greatest risk to the security of the Nation. Defining its five mission areas, PPD-8 outlines the Prevention, Protection, Mitigation, Response, and Recovery areas and directs the development of a series of policy and planning documents to enhance national preparedness, including the development of a National Planning Framework for each mission (e.g., National Response Framework (NRF)). Each mission area and framework has a federal plan called a FIOP that provides further detail regarding federal roles and responsibilities, specifies the critical tasks (CTs), and identifies resourcing and sourcing requirements for delivering core capabilities.

Building upon the National Response Framework (NRF), the Response FIOP sets the strategy and doctrine for how the whole community builds, sustains, and delivers the Response core capabilities identified in the National Preparedness Goal. The Response FIOP describes the concept of operations for integrating and synchronizing existing national-level Federal capabilities to support local, state, tribal, territorial, insular area, and Federal plans, and is supported by Federal department-level operational plans, where appropriate. The Response FIOP is further broken down into functional annexes and incident specific annexes to describe Federal roles in a specific incident.

The incident annexes specify contingency or hazard situations or an element of an incident requiring specialized application of the general response concept of operations. They describe coordinating structures, in addition to the ESFs, that may be used to deliver core capabilities and support response missions that are unique to a specific type of incident. Incident annexes also describe specialized response teams and resources, incident-specific roles and responsibilities, other scenario-specific considerations, and an execution schedule to guide the employment and deployment of assets. The Oil/Chemical Incident Annex serves as is an incident specific annex to not only the Response FIOP of the NRF but to the Recovery FIOP as well. 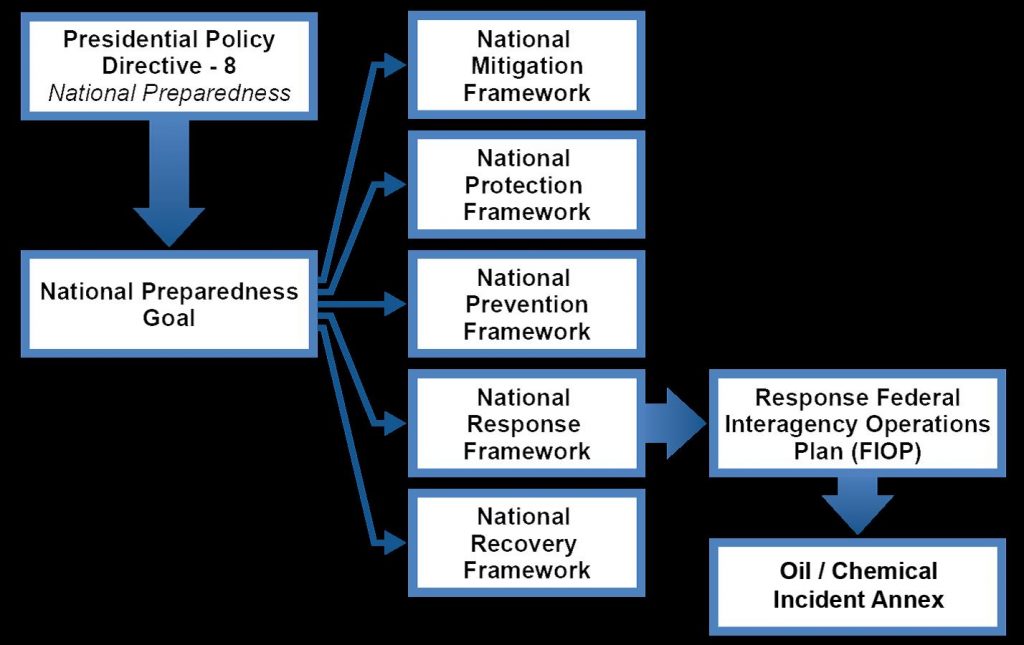 Oil/Chemical Incident Annex Overview
In June 2016, the federal government released the Oil/Chemical Incident Annex to the Response and Recovery FIOPs. It describes the process and organizational constructs that will be utilized by federal departments and agencies for responding to threats or incidents causing oil spills or chemical releases, whether resulting from deliberate acts of terrorism or crime, accidents, or natural disasters. This annex applies to all federal responses to oil and chemical incidents, regardless of size or complexity, and includes accidental and deliberate releases.

Legal Authorities and Scope
While the Oil/Chemical Incident Annex applies to all federal responses to oil and chemical incidents, the annex does not alter or impede the ability of any SLTT and insular-area government or Federal departments and agencies to exercise their authorities or to perform their responsibilities under the law. Federal departments and agencies may take appropriate independent emergency actions pursuant to their own statutory authorities and those described in national policy. Furthermore, the annex recognizes that several legal authorities may be activated or used by federal departments/agencies for the prevention of, response to, or recovery from an oil or chemical incident. The Oil/Chemical Incident Annex does not alter the legal responsibilities of private sector entities responding to oil and chemical incidents.

Private Sector Responsibilities
As previously noted, not much has changed with regards to private sector responsibilities in responding to and recovery from oil and chemical incidents, as this annex is largely focused on Federal roles and responsibilities. Private sector owners and operators still bear the primary responsibility for the security and safe operation of their oil and chemical facilities, vessels, and conveyances, including for cleaning up their oil spills and chemical releases. In addition, government agencies still have obligations and responsibilities for public health, safety, and welfare; regulatory oversight; protection activities; and the law enforcement response to incidents. In some cases, these actions may be taken by government agencies with their private sector counterparts. Governmental entities work with owners and operators to ensure the safe operation through regulations, inspections, and planning and prevention activities. Owners and operators bear a critical notification and first-response obligation in the event of an oil or chemical incident involving their facilities, vessels, and conveyances.

The Oil/Chemical Incident Annex outlines four federal response coordination constructs that may be used to effectively respond to oil and chemical incidents that range from the less serious incidents to those that may have catastrophic impacts. Three of the four response coordination constructs describe how a response under the National Contingency Plan (NCP) is conducted when there is no Stafford Act declaration, while the fourth describes how a response is conducted when there is a Stafford Act declaration.

The coordination constructs include:

OSC Assessment Under the NCP
The pre-designated EPA (inland zone) or USCG (coastal zone) OSC for the geographic area where the discharge or release occurred reviews all release notifications received from the National Response Center (NRC). The OSC may determine that federal involvement is needed or may determine that the response is being adequately addressed by SLTT governments and/or the Responsible Party (RP). Most oil and chemical incidents are addressed by SLTT governments and RPs. Under Comprehensive Environmental Response, Compensation, and Liability Act (CERCLA)and Clean Water Act/Oil Pollution Act (CWA/OPA), RPs are responsible for cleaning up their oil spills and chemical releases and/or paying for the cleanup.

NCP Response
The OSC makes a preliminary assessment of impacts to determine the appropriate level of federal NCP response. The OSC collects pertinent information, to the extent practicable, about the release such as:

In all cases, the OSC makes an independent evaluation of the need for federal response under the NCP.

NCP Response with ESF Support
When the impacts of an oil or chemical incident require the addition of significant federal resources outside the usual scope of NCP support, the OSC or other senior EPA or USCG officials may request the DHS Secretary to provide the assistance of other departments and agencies or other federal capabilities while maintaining operational control of the federal NCP response. This assistance will usually be coordinated by a Federal Resource Coordinator (FRC) from the Federal Emergency Management Agency (FEMA). In support of the OSC, the FRC will selectively and appropriately task the Federal ESF lead agencies to bring to bear needed federal-to-federal assistance capabilities.

Stafford Act Declaration and Response
When an oil or chemical incident has or is anticipated to exceed SLTT or insular-area resources, either alone or as part of a broader incident such as a natural disaster or large-scale terrorist attack, a request for assistance under the Stafford Act may be made by the governor or chief executive of a federally recognized Indian tribe. If the President declares a Major Disaster or Emergency, federal financial and other support will be made available in accordance with the Stafford Act. FEMA is the lead agency for carrying out the Stafford Act and designates a Federal Coordinating Officer (FCO) to coordinate the federal response when a declaration is made. The federal response under a Stafford Act declaration is described in the NRF and Response FIOP.

The FCO coordinates the overall federal response, and the OSC coordinates the environmental response to oil and hazmat releases with other federal support departments and agencies as described in the NRF’s ESF #10 (Oil and Hazardous Materials). Under this construct, NCP response structures and coordination mechanisms are used as the framework for ESF #10 response actions, but are now coordinated through the FCO.

In the case of a terrorist threat or attack, the Federal Government will conduct response and prevention operations to save lives, protect property, resolve threats, and prevent further attacks. This will involve operational coordination, information sharing, and well-informed decision making at senior levels of government to ensure an effective response. While the Oil/Chemical Incident Annex does not explicitly state this, there is potential for a private sector role in operational coordination, information sharing, and decision making.

The Attorney General (AG), generally acting through the Director of the FBI, leads and coordinates the operational law enforcement response, on-scene law enforcement, and related investigative and appropriate intelligence activities related to terrorist threats and incidents. For some oil and chemical incidents, it will not be immediately clear if there is a criminal or terrorism nexus. It is the policy of the United States that, until otherwise determined, any possible terrorist incident will be treated as an actual terrorist incident.

If an EPA or USCG OSC makes an initial discovery of suspected criminal or terrorism activity associated with a discharge or release, the OSC generally contacts the EPA Criminal Investigation Division (CID) or USCG Investigative Services (IS). For suspected terrorist activities, EPA CID or USCG IS, in conjunction with the OSC, will consult and coordinate with the local FBI field office. However, coordination can occur directly between the OSC and the FBI Special Agent in Charge (SAC) depending on the nature and urgency of the incident.

When incidents occur as a result of suspected criminal activity or act of terrorism, the AG and FBI Director utilize various FBI organizational and investigative elements to ensure effective operational coordination and information sharing. At the field level, response activities should be coordinated with the FBI On-Scene Commander and the location of a suspected or actual deliberate oil or chemical incident will be treated as a federal crime scene. As such, the preservation and collection of evidence is critical and it is important to ensure that response and recovery personnel, including private sector personnel, understand and recognize possible access restrictions to crime scenes.

Funding
When a Major Disaster or Emergency under the Stafford Act is declared by the President that involves an oil and chemical incident(s), a separate set of programs and frameworks for cost reimbursement applies. As such, there are generally two types of funding available for the coordination of federal resources: Stafford Act and non-Stafford Act funding. Non-Stafford Act funding includes:

As part of a Stafford Act declaration, in a natural disaster response concurrent with an oil or chemical incident, government entities may seek to recover from RPs the costs of actions related to oil and chemical contamination as specified in CERCLA and the CWA/OPA. 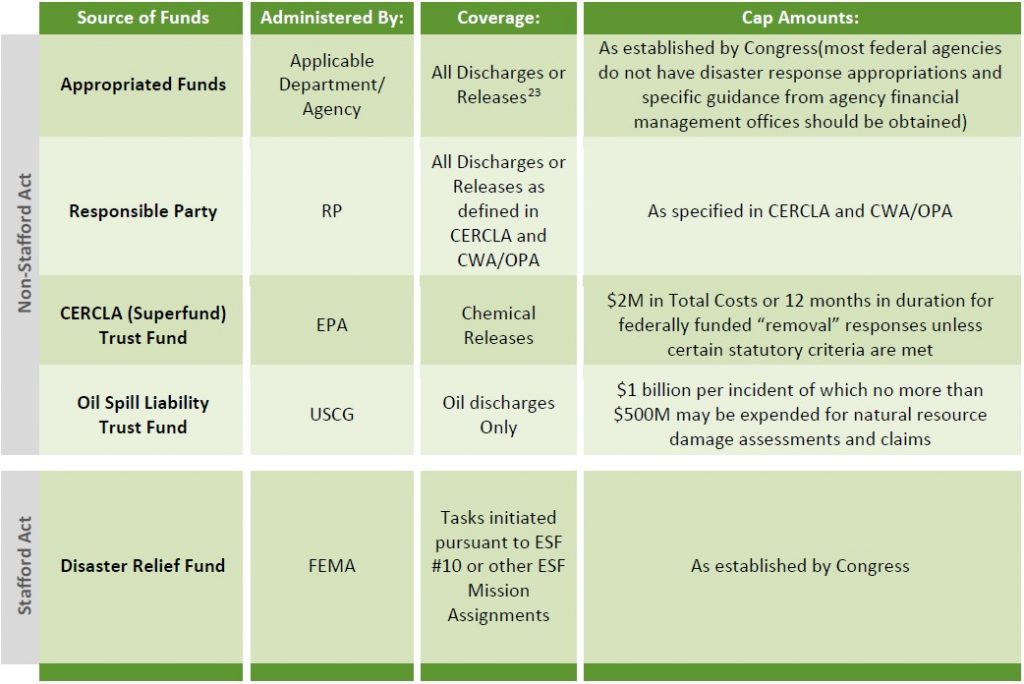 Summary
Nothing in the Oil/Chemical Incident Annex alters or impedes the legal requirements of private sector entities to respond to their own oil and chemical incidents. Private Sector owners and operators still bear the primary responsibility for the security and safe operations of their oil and chemical facilities, vessels, and conveyances, including for cleaning up their oil spills and chemical releases. The Oil/Chemical Incident Annex mostly serves to describe federal activities that may occur in conjunction with NCP and private sector response action. It is important for industry to understand how the federal response will operate, as they may be called upon to assist as part of a larger response and recovery effort and may interact with government agencies to mitigate incidents in their area of operations.